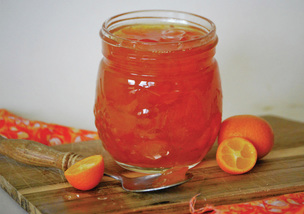 To make the marmalade, wash the kumquats.  Slice them as thin as as you can — peelings and all.  Carefully remove the seeds, as you come across them.  In a small heavy-bottomed saucepan over medium-high heat add the kumquats, sugar or honey,  and water.  Sir with a wooden spoon.  As you do this more tiny seeds may float to the top of the water — remove them with the spoon. Bring to a boil, then immediately reduce the heat to an aggressive simmer.  Cover with the lid and stir frequently.  After about 30 minutes the kumquats should be tender, though it may happen sooner depending upon your heat level.   Remove the lid, raise the heat, and let cook a bit longer until the mixture becomes your desired consistency.  About another 15-20 minutes is where I like mine, though it will depend on how high your heat was.  Keep in mind that it won’t completely thicken until it is chilled in the refrigerator.   Remove from the heat and let cool a bit in the pan before you pour it into your sanitized jam jar.  Put into the refrigerator to chill.  It will keep for about a month — though it will be long gone before then.
Thanks for stopping by Relishing It!  Have a great weekend.