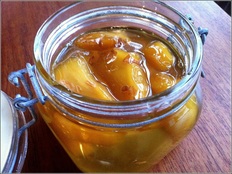 Ingredients:
325 g fresh ginger root
300 g (1½ cups) sugar
Water to cover the ginger
150 ml (3/4 cup) ginger cooking water
Instructions:
Optional:
Freeze the ginger overnight (freezing tenderises the ginger)
Peel the ginger and cut into 2 cm thick slices.
Add the ginger to a pan and cover (by a couple of centimetres) with water. Bring to the boil, cover and simmer for about an hour until nice and tender.
Lift out the tender ginger pieces and set to one side while you make a sryup.
Measure the cooking liquid and add 150ml back to your pan along with the sugar.
Return to a gentle heat and stir to dissolve the sugar - once the sugar has dissolved stop stirring.
Bring to a boil and simmer gently for about 15 to 20 minutes until you have a nice thick syrup.
Add the cooked ginger back to the pan and simmer gently for 20 minutes before transferring ginger and syrup into a sterilised jar and sealing.
Store in a cool, dry place for up to a year.
Notes
Does not include optional overnight freezing.
Recipe can easily be doubled.
Use the syrup in cocktails or like a cordial with a sparkling water.

Stem ginger preserved in syrup is a very useful store cupboard ingredient.
Whether you use it on vanilla ice cream or make a sauce with it, it will add both sweetness and heat.
Crystallised or stem ginger is just ginger that is preserved in sugar syrup or in honey – it is sweet with a bit of heat and is used in desserts, salads, sauces and baking. Increasingly it is used in savoury cooking – we use it to add sweetness and heat to Moroccan tagines. It is easy to make at home.

You'll need one ginger root (that's the whole piece you find in the shop, not just a piece of it) and 225g runny honey.
1. Peel the ginger with a small spoon. Cut into 1/4 inch chunks. Put the ginger in a saucepan, cover with cold water and bring to the boil. Turn the heat down and simmer the ginger for 20 minutes, replenishing the water as it dries out. Drain and add more cold water, bring it to the boil and simmer the ginger for another ten minutes or until a sharp knife will cut into it easily. Throw away the water in the saucepan and add 225g jar of honey and 100mls cold water to the ginger root. Cook over a gentle heat for 10-15 minutes or longer if you need to, to make sure the syrup has thickened. It should be runny but not watery.
2. While the ginger is simmering with the honey, put a 500g preserving jar in the oven at 170C/325F/Gas 3 for 10 minutes to sterilise it. Put the rubber ring belonging to the preserving jar in a bowl of boiling water and leave for a minute. Remove and dry and place on a clean piece of kitchen towel so it remains sterile. When the crystallised stem ginger has finished cooking in the honey, pour it into the warm jar and seal immediately. Use within 3 months. 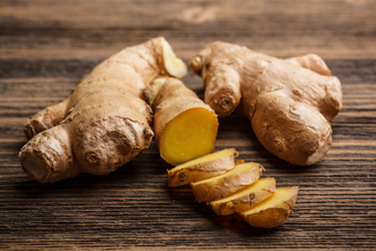 I’m pleased to see you enjoyed the ginger story. Making both stem ginger and crystalised ginger is actually really easy, but it works best with fresh young ginger, before it has become fibrous and tough. The fibres become quite stringy and there’s nothing you can do to get rid of them. So, if you can only get your hands on the woody stuff, wait until better quality arrives.
Firstly, peel around 800g of ginger. You can do this really easily with a potato peeler — although the purists would use a teaspoon to scrape the skin off. If the ginger is knobbly, make sure you either pull the knobs off and use for something else, or get that teaspoon scraping properly! Slice the ginger against the grain, much as you would a fillet of meat — that is, don’t slice it lengthways, but across the tuber. You want to end up with 500-600g peeled and sliced ginger.

​Slice it as thin as you think you’d like it. For chocolate dipping you want it no more than 2mm thick. For use in scones, biscuits and the likes it can be a thicker as you’re likely to chop it up anyway.
Place the sliced ginger in a non-reactive pot and cover with enough water to cover it by 1cm. Bring slowly to the boil, then simmer five minutes and drain in a colander. Do this three times and when you’ve finished, put it back in the pot and pour on a litre of water and 850g of white sugar or unrefined golden sugar. You can use brown sugar but the ginger flavour will be masked and therefore less intense. Add two good pinches of fine salt and slowly bring to a gentle boil and then cook until the syrup resembles a light runny honey. If you have a sugar thermometer, or a digital thermometer that you can immerse in liquid, cook until it reaches 106C. At this point you can decant the ginger and syrup into sterilised jars, seal them while hot and leave to cool overnight at room temperature. The next day place in a cool pantry or store in the fridge and the ginger will last for up to 1 year.
If you’d like to make crystalised ginger then once it’s ready and while it’s still hot, drain it into a colander over a bowl — don’t throw the syrup away as it’s a terrific cordial. Let the slices drain really well — you can even pat them a little dry in a tea towel. DON’T use kitchen paper as it will end up sticking to the ginger. Toss the slices, ideally while still a little warm, in 2 cups sugar and leave for a few minutes. Toss again and then lay the slices out separately (don’t overlap) on a cake rack. Leave at room temperature overnight covered loosely with a cloth napkin. If it’s really warm place them somewhere cool as the sugar will sweat. Next day store them in an airtight container and use within a few months. The sugar that comes off them can be used in ice cream or sorbet, sprinkled over baked rhubarb or quince, in fact in anything that would benefit from a grunty hint of ginger.