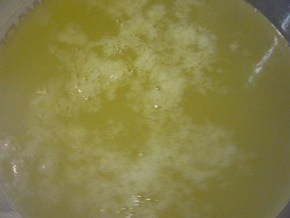 Making your own homemade Marula beer
First collect ripe fruit from the ground beneath the trees and wash the fruit.
Remove the skins of the fruit.  I cut them round the equator and twist and squeeze the fruit pulp, pip and juice out.
Collect all the pulp, pips and juice in a large container and once you have finished peeling the fruit, add clean water to just cover the fruit and mash the fruit thoroughly till the liquid in the bucket becomes quite thick.
Remove the pips and left over pulp by squeezing them a few at a time.
Cover and leave for 2-4 days depending on the strength you desire.
Skim off foam and pulp that has risen to the surface and if you wish you can strain the beer through muslin before bottling it.
​
Bottle in hot sterilized bottles and seal well
Store in a cool place till needed.
I added sugar to my brew after Warren gave me a taste of his beer.  Bleugh – it was VERY sour

I was highly sceptical of the marula beer I was making.  My taste of Warren’s beer put me off for life.  It was really so very sour and vinegary.  I was curious about my batch but was ready to pour it down the drain or give it to some of the local people who like it.
For three days the lid had been popping off despite the heavy cast iron pot that I had balancing on the container to keep it closed.  Every time I reclosed the container I got a slight whiff of vinegar – bleugh
Last night was the night to test the final product as it had been fermenting for three days.  I made sure I had had my dinner first because I was sure the beer was going to turn my stomach.  There was a huge glob of pulp that seemed to have formed in the beer and had floated up towards the top of the container slowly.  By last night it was all on top of the beer.
I moved the container to the sink to open it and gently raised the lid.  Surprise surprise – there was no smell of vinegar but a lovely yeasty smell similar to that of homemade ginger beer.  The glob had formed a nice foamy head.
The head was about 2 inches think and was really compact. I was able to lift it off the beer using a slotted spoon in two big blobs.
Underneath I found a fresh, sparkling, bubbly golden liquid.  My hopes were rising.
I quickly dipped a small glass into the beer to have a taste.  YUM!  It is so fresh, yeasty and bubbly – just like homemade ginger beer with a marula twist.  I am so glad that I added the sugar.
I quickly sterilised some old beer bottles that I had on hand and bottled my marula beer
Warning:  Don’t forget to release the pressure in your bottles daily or at least every second day.  We learned the hard way and the Bean and I scrubbed walls, floor, counters and tables till late last night.  At least they say that beer conditions hair because  I got a good dose of it over my head as it dripped off the roof 5 meters above the explosion.